Huntsville is a northern Alabama city that initially grew due to its railroad and cotton industries. Today, it’s best known for its aerospace industries and military technology. The Saturn V rocket that sent men to the moon for the first time was designed and tested by scientists here. Huntsville is today is filled with rocket scientists and the Marshall Space Flight Center of NASA continues to be at the forefront of America’s rocketry construction and research. This has earned the city its nickname “Rocket City”.

The top visitor attraction in Huntsville is definitely the amazing United States Space and Rocket Center and it’s also popular as being the Space Camp home. However, there are enough attractions here besides the space-related activities. Huntsville offers a wide range of culinary, historical, and cultural attractions, which include lush botanical gardens, an excellent art museum, as well as several quirky entertainment and dining venues. There are lots of things to do here and it’s easy to spend some days in Huntsville. Here are some sites you shouldn’t miss when in Huntsville, Alabama. 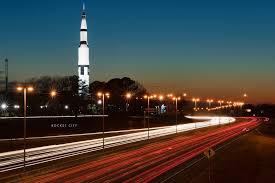 Located in the city center, the park is where John Hunt’s cabin was built. Today, there is a beautiful green space featuring a lake brimming with flocks of geese, ducks, and koi. You can have a picnic here, stroll around the park or simply sit and relax. The gifts that have been received from other countries have made this park international. Here you will find a red Japanese bridge and cherry trees donated by the Japanese. Other gifts include a sundial from Germany, a bench donated by the U.K., as well as a fog bell and lighthouse donated by Norway. 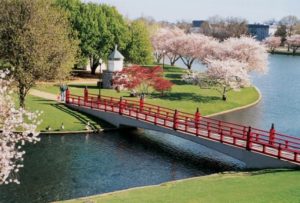 The depot is Alabama’s oldest and one of the oldest in the country. It was once served as a prison for Confederate soldiers during the civil war. The graffiti of the prisoners are still visible on the walls. Until 1968, this depot was used as a passenger station but it is now on the register of national historic places. Catch a glimpse of the past at Huntsville Depot & Museum with its historic buildings and trains or just a picnic and relax in the pavilion.